The beautiful peninsula of Baldersnäs is surrounded by Lake Laxsjön.  Between rolling meadows and exotic trees hides the story of a Guided tourmagical transformation – from wilderness to a romanic parc of international standard comparable to Haga and Drottningholm in Stockholm. Your guide will take you on a walk through 200 years to The End of the World on the very north tip of the peninsula. Here you will taste the flavours of aquavit form the forests of Kroppefjäll and an introduction to how to flavour your own. Toghether with the aquavit you will be served delicious snacks, from Öjentorp Kök, the restaurant at Baldersnäs manor.
The man who built his dream was Carl Fredrik Wærn. He owned several iron works in Dalsland, bought the estate from his uncle 1823 and renamed it Baldersnäs after the old norse God Balder. In the entrance is the statue of Balder still standing, and you will be as surprised as Carl Fredric Wærn the he was dressed as a roman soldier when he arrived to his new home in the 1830s. From 1823 until his dead in 1858 C F Wærn created a lush farm and garden and dozens of installations for fun and relaxation in the parc. Some are still there, others are just joyful memories and a part of a fascinating history from the middle of nowhere in Dalsland. 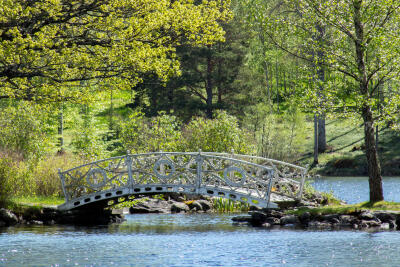